The minute I saw the map on screen I knew there was something wrong. It's eight in the morning, where are the Ryanairs, the Corendons, the Easyjets...where are the planes ! The sky over Greece should be filled with planes and all I see is a solitary C-130 of the Greek air force. Something is very wrong.

I check the other online flight trackers and get the same very wrong picture : no planes. Some don't even show the lone military transport plane. Apart from 3 or 4 cargo planes crossing Greek air space high above there's not a single plane up there ! Athens airport looks deserted, no planes that have just landed or are about to take off on the tarmac. SKG, that's Thessaloniki to you landlubbers, is the same. All airports look deserted.

It looks like Greek air space is closed but I can not find any NOTAMS (Notices to airmen) to that effect. 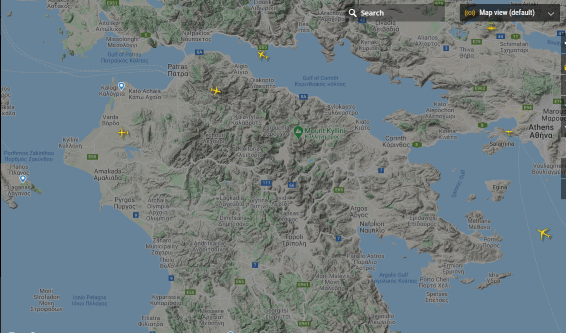 When there's a single light-blub on the blink on the Skyros runway there's a NOTAM. Surely you'd expect there to be one to alert airmen...airpersons, that the whole of Greece is closed !

The Athens Airport's site's Arrivals and Departures page lists an internal flight from Mykonos as the last arrival at 07:45, all the other flights that should have been arriving or departing are listed as "Scheduled". Not delayed, not cancelled : scheduled.

This is wrong, very wrong, and I'm starting to worry.

Nothing anywhere online about Greek air space being effectively closed. Am I the only one to notice this extraordinary thing ? Nothing on the travel sites, airport sites, the press, not even the Open-source intelligence people seem to have noticed ! The worry turns frantic : someone somewhere must be seeing this too. Someone somewhere must be wondering, worrying too. Right ? Wrong, very wrong ! To the rest of the world this is just another vanilla Thursday.

Have the airlines been secretly told a secret war with Turkey secretly broke out ?

It is almost noon when finally a plane appears. It sits on the tarmac at Athens airport but it is a plane and it looks like it is going to fly somewhere : a short hop to Mykonos (again). 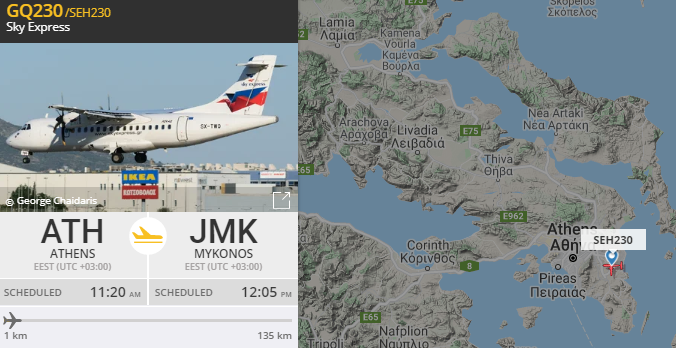 More planes, all internal flights, start to appear on runways around the country and take off one after the other. There's planes ! Actual planes flying ! No foreign flights though, not one, so the skies over Greece have sort of reopened. Then, suddenly...

The first foreign flight to appear is a Condor flight from Munich and suddenly there's planes all over, the floadgates have opened.

Apart from being foreign and mostly unscheduled flights they all have one other thing in common : they all have a delay of 3 to 4 hours ! Suddenly there's planes landing and taking off like there's no tomorrow. 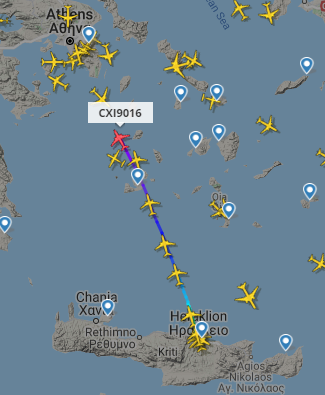 On the above screenprint you can already see the next problem building : a huge queue of flights stacking up itching to take off at Heraklion airport and sure enough in the next few hours HER (Heraklion) looks like it's about to beat LHR (London Heathrow) as busiest airport in Europe.

This picture pretty much repeats itself at every airport around the country. While the many departures stress air traffic control, the arrivals pose an even bigger problem. Most affected are Corfu, Kos and Rhodes. Things are approaching the limit of what is safe and here and there that limit is crossed. Rhodes is hardest hit. At one point there are 6 or 7 planes flying a holding pattern while others are trying to take off.

First no planes were a serious worry now too many planes are an even bigger cause for worry. Things are at the very limit and there are a lot of people in the bellies of those machines, one moment of inattention and...it's almost too much to watch.

Around Rhodes things are pretty hairy. This Austian Airlines Airbus A319, one of 4 flights in a holding pattern over Rhodes at that point diverts to Kos to avoid a fuel emergency. 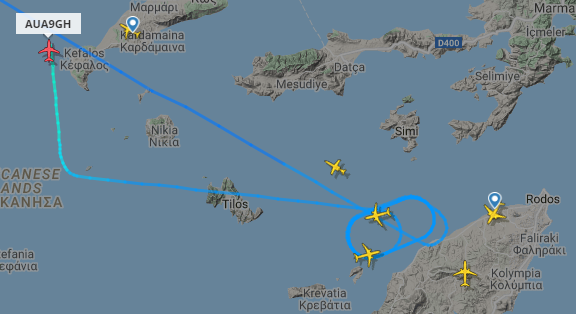 Here's a Condor flight to Hamburg taking off and making a hair raising maneuver. All flights taking off from Rhodes now make sharp turns, studiously avoiding Turkish air space, but this one takes the cake circling back through the take off path as it does. And notice the stack of planes still waiting to run the gauntlet on their way out while at the other end the stack of planes in a holding pattern waiting to land also grows. 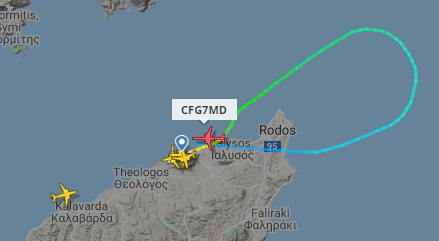 Back to plane planes ?

Throughout the day things gradually, slowly return to something resembling normal although the knock-on effect of this event will be felt for days to come.

But all is not well. While the storm subsided, thankfully without any major incidents -- that at least the press would have picked up on -- the weirdness continued.

While several airlines like Ryanair and Sundair started repositioning planes around Greece after the initial sudden rush, a number of anonymous (ADS-B blocked) jets started to appear. These were not just your average jet-setters' CitationJets or Learjets small-fry but mainly big Boeing Business Jets of the super rich. They suddenly came out of the woodwork and scurried off out of the country. 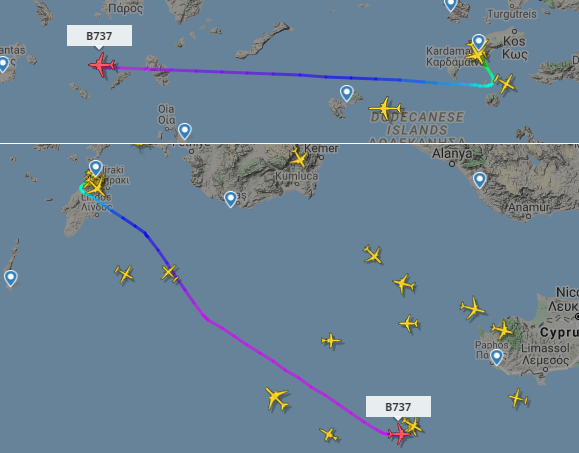 Here's just two of those 'anomynous' big private jets leaving, both Boeing 737 BBJs. One from Kos to parts unknown and another from Rhodes to Tel Aviv.

Apart from costing millions it caused potentially dangerous, life-threatening situations affecting hundreds of people in the air and on the ground.

No one but the airlines affected appeared to know.

No one appears to have noticed or reported on this major event. Bearing in mind the tensions between Greece, Turkey and others around the Mediterranean this beggars belief and defies reason.

So, what happened ? What is going on ? Your guess is as good as mine. Well, no it isn't, is it : for starters I noticed and I will give you my best guess with all the 'evidence' I managed to collect in Part 2.