When I heard Armenia claimed to have shot down a Turkish 'Standard-bearer' aka Bayraktar drone I immediately hit the WWWs in search for confirmation and more importantly pictures. Obviously the idea was not to gloat or indulge in some serious Schadenfreude because well that would be unseemly, wouldn't it. The idea was to get an unrestrained close-up look at the machines I so often see on flight trackers as a mere yellow icon or in pictures in a PR setting.

Although I am by no means an avionics expert, I was also hoping to maybe find something to support a theory I cherish regarding the Turkish drones and how to track them.

When they appear on flight trackers on-line the data the drones appear to send out is pretty useless : no or changing registrations, ever changing impossibly long call signs -- who are you going to call in a drone anyway ? -- and illegal ADS-B addresses.

So how are you going to track them ? Is the drone you see here today the same one you saw elsewhere yesterday ? How do the Turkish controllers on the ground do it ? How do they tell them apart and track them ?

The answer I figured must be the 24-bit address. I noticed that while the registrations and call signs kept changing -- sometimes there are even two drones with the same call sign aloft -- the 24-bit addresses appear to be unique and recurring. So I assumed the controllers may be able to set the call sign and registration remotely from their mobile command and control containers, but the 24-bit address probably requires some knowledgeable chappie on the ground fiddling with the drone's innards.

Obviously, there may be some other way the controllers can identify individual drones in action I am not aware of not being a pilot or avionitcs expert, so I was hoping some of the bits and bobs visible in the pictures from the wreckage might give me a clue as to how that works. 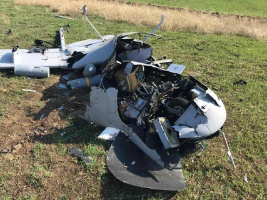 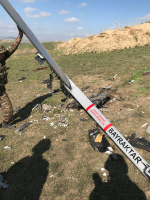 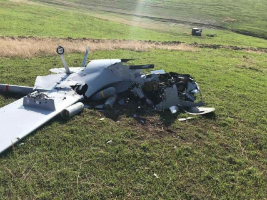 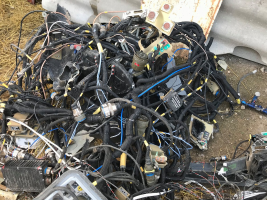 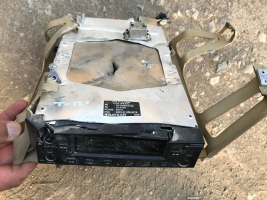 A TB2 in not such good nick.

The bottom right picture is the interesting one, the others I'm afraid are just wreckage or a pile of swept up cables and wires. I immediately spotted the brand name "Garmin" and scooted over to their site to see if I could identify the product. It took all of 2 minutes.

Unless I'm very much mistaken this expesive bit of Garmin kit is what the controllers in the container talk to to make the drone go where they want it to go. It is interesting for several reasons but the most important one is that this is an off-the-shelf commercial non-military product.

Clearly this nav/comm radio was never intended for this use and it's overkill for this application. Since there is no one inside the drone to push the buttons, fiddle the knobs or read the display, as explained in the manual (pdf), it's all wasted functionality. However by building the drone with off-the-shelf components -- with the exception of the air frame itself I would imagine -- they can build these 5 million dollar Bayraktar units without bothering with the component manufacturers or being bothered by their questions and export restrictions on military or potential dual-use equipment that may apply, and just as crucially the same applies to their customers who buy these machines.

The EU and others may slap export restrictions on Turkey for it's continued intransigence, provocations and indeed law-breaking in the Mediteranean, Armenia, Syria, Iraq and Libya, if they can buy the gear they need on-line, through a 'cut-out' if need be, they're in the clear and not bothered by any of that and so is anyone who buys one from them. If a components goes on the fritz they just buy a new one on-line and Amazon or who ever delivers it next- or even same-day. It may cost a bit extra but that is clearly worth it : nifty military gear, no questions asked and noone's the wiser.

So where does that leave us regarding the original question : can the 24-bit address be reasonably reliably used to identify individual drones and track them over time ? The Garmin manual (pdf) for the GNC 255 makes no mention of the 24-bit address, mode-s or ADS-B so it would appear the ground controllers cannot set the address through this device. Given what we've learned about the construction and assembly of the Bayraktar, namely that it's built mainly with off-the-shelf components, it is likely that the ADS-B data is sent using another commercial off-the-shelf device, possible even another Garmin product that's plugged into the navigation radio. If that is the case it would appear that the ADS-B address is set on the ground by a pair of trusted hands as I understand is the case with regular manned aircraft and that "Yes" the 24-bit address can be used to track the drones at least until the technician on the ground changes them and I would image one would notice such a change : a new nonsense code would appear while another would drop off. Unless of course one assumes someone somewhere keeps a detailed accounting of a stock of illegal addresses in use and that they are then rotated across the drones. Not impossible but it would take some doing and coordinating.

The most important lesson however is no doubt the fact that the Bayraktar and most likely all other drones made in Turkey are assembled from commercial off-the-self components.

Garmin has become aware of Turkey's use/abuse of it's products and published this statement.

And I have become aware that others have also noticed Garmin and other off-the-shelf commercial products go into Turkish drones :